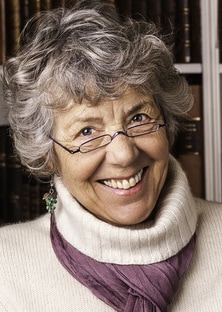 Elizabeth Weir (Liz) grew up and trained as a nurse in England and worked as an RN in South Africa before coming to live in Minnesota with her husband and two young sons. While raising the boys, she dipped into weekly news reporting, travel writing and arts reviewing for the Lakeshore Weekly News, where she also wrote a weekly column.

Coming from another country, she felt a need to root more firmly in her community and served the City of Medina for 17 years as a Planning Commissioner, City Council Member and, finally, as Mayor of Medina, retiring at the end of her term in 2014.

In high school in England, Liz loved the wonder she found in the poetry of Stephen Spender, Percy Byshhe Shelly and Louis McNiece, but the rush of adult life swept in. She is grateful to Professor Chet Corey of Normandale College and Metropolitan State University professors Lawrence Moe and Piers and Kathy Lewis, who reawakened her joy in the pleasure of good words.

​For Weir, the best poems are windows, where the mind is conscious of the pane but sees a world beyond.
More about Liz

I grew up in Cheam, Surrey in England at 54 Nonsuch Walk, with my three brothers, our parents, Tina, the dog and Danny, the cat. Times were hard after WW II and food, scarce and expensive. Each family member had a ration book, limiting how much could be bought, and our Mother walked to Cheam to shop at the local co-op, butcher and fishmonger. Children’s rations included a quarter lb. of sweets, (candy) once a month, and we bicycled to Ebon's to buy our share. My older brothers sometimes stole my aniseed balls on the way home, but I cured that problem by first “washing” my sweets—sucking each one before returning it to the white paper bag. To supplement our food, we kept chickens at the bottom of the garden and, after coming home from work in London, my father tended a large vegetable garden.

We had no car, and our chief recreation was walking to beautiful Nonsuch Park, once a favored hunting ground for King Henry VIII. Each season was different, with profuse May blossom in Spring, and picnics in summer fields. Autumn brought sweet chestnuts and conkers to gather and the glorious copper of woodland beech trees.

I spent hours with Cherry, our next door neighbor, and irritated my mother by liking horses, instead of being interested in ballet and pretty things. Cherry and I rode and volunteered at Brenda Waby’s riding stable, where I became handy at mucking out and cleaning tack—anything to be around horses.
​
​After high school, I trained as an RN at Guy’s Hospital, a venerable institution near London Bridge, and bicycled through busy London streets to go the theatre or to the Tate Museum, a favorite. In London, I met some young South Africans and, being keen to see the world, I flew to visit them. While working at Groote Schuur Hospital in Cape Town, where Professor Barnard did the first heart transplant, I met Ken, my husband. Opportunity for Ken to practice cardiology and do research at the VA Hospital in Minneapolis brought us to Minnesota, where we have lived ever since.
Contact